The Ministry of Rural Rehabilitation and Development (MRRD) was established to develop and implement programs promoting responsible social and financial growth in rural areas, primarily in the non-farm sector. It has employees in all 34 Provinces of Afghanistan, and delivers a wide range of programs funded both by the Ministry itself and the International Community.
MRRD aims to reduce poverty amongst the approximately 80% of Afghans who live in rural areas by implementing a made-in-Afghanistan “Pro-Poor” growth strategy which calls upon the government and civil society to address the macro economic constraints, the small size of the formal private sector, and the realities of rural poverty in order to implement realistic poverty reduction and development strategies. These strategies are developed within the broader context of the interim Afghan National Development Strategy (i-ANDS), the roadmap the Government of the Islamic Republic of Afghanistan (GOA) is following as it works towards achieving the UN’s Millennium Development and Afghan Compact goals.

The commission was dissolved in 1348 (1969), and its property and personnel was dispersed into different ministries, such as Ministries of Education, Health, and Agriculture. The office was re-established under the name of Rural (Mahal) Development Office in 1349 (1970). After changing its name several times under the different authorities, the office was dissolved again in 1363 (1984).

Finally, the Rural Management Office became an independent ministry known as MRRD on 21 Sour (the second month of Afghan year) 1367 (1988). The first office of MRRD was located in Dural Aman Area, District 6 in Kabul City.

When the Transitional Islamic State of Afghanistan was established in 2002, MRRD was reborn with its new mandate, policies and strategies to promote poverty reduction and social protection in rural Afghanistan. Since then, MRRD has embarked on a vigorous institutional reform and restructuring to serve the needs of the people in Afghanistan.

To ensure the social, economic and political well-being of rural society, especially poor and vulnerable people, through the provision of basic services, strengthening local governance and promoting sustainable livelihoods free from a dependency on illicit poppy cultivation. 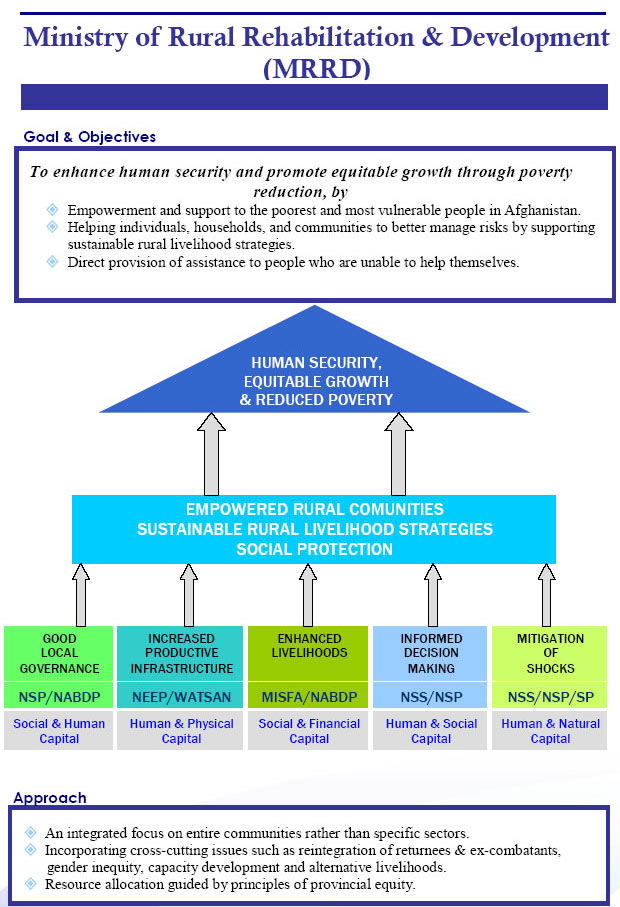